Requests per second vs. number of concurrent connections? 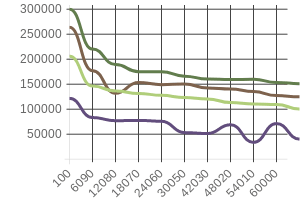 Lwan was until recently just a personal research effort that focused mostly on building a solid infrastructure for a lightweight and speedy web server.

Its simple architecture and tiny source code guarantees the entire code base can be easily grokked.

Connections are handled individually by coroutines, which are transparently and efficiently juggled by a per-CPU cooperative scheduler, giving the illusion of blocking I/O to handlers.

Resource management is also greatly simplified with coroutines: whenever a client connection is closed, memory is automatically reclaimed, files are automatically closed, references are automatically decremented. This provides more predictability than most garbage collectors, helping keep latencies low while being almost as easy to use.

Lwan is a work of art. Every time I read through it, I am almost always awe-struck.@neurodrone

What is deadlier than bullet points?

A continuous integration systems helps keep the house in order:

Nice work with Lwan! I haven't looked that carefully yet but so far I like what I saw. You definitely have the right ideas. @thinkingfish

How to build, setup, and run

The README.md file in the repository will list build dependencies, commands, and set up information.

The Hello, World! handler, shown below, was used to generate the above chart. While the API is simple, Lwan isn't a framework, so not everything is built-in; some features will actually require changes to the internals, as they're very tightly-coupled.

However, it's enough to run some frameworks, such as Sailor. To whet your appetite, an improvement of the program above could be easily written in Lua like so:

Lwan infers what method and endpoint by the function name, so there's no need to specify them with something akin to an lwan_url_map_t array. In this case, issuing a GET /hello will be sufficient to run this handler.

An in-depth view of the C API can be seen in this article, but your best bet would be looking throughout the "samples" or "tests" directories.

One of the samples shipped with Lwan is the "clock" sample, which renders the current time as a never-ending animated GIF file, streamed using chunked-encoding. The following Dali Clock (other styles available) shows the current time in UTC, and is rendered completely in the server-side; no JavaScript is required in the client-side to display it:

How is it possible to write a “hand-crafted HTTP parser” in 2014, and not have at least an H2 for security?@gnat

We're not security experts, by any means. Having said that, here are some facts:

So, to answer the question: we have no idea. We were dead serious when we said we're not security experts. But care is being taken to at least find the most mundane sources of vulnerabilities and fix them before they hit the source tree.

There's nothing stopping you from exploiting Lwan, however. We would specially appreciate a public writeup about the bug; we'll even pay you a drink if we ever meet in person.

It's interesting how some of the tricks you used for performance also made the code less "risky". For example all the parsing is just setting pointers, no allocation of new buffers, so there isn't much opportunity for memory corruption, and coro_defer makes use-after-frees pretty much impossible. immerse

A web server is rarely the bottleneck. Why not just use Nginx or Apache?

If you're asking this question, then you probably should. These web servers are well known, stable, compatible with almost everything under the sun. People depend on them. Breaking their behavior will most likely make some system administrators very upset. On the other hand, few (if any) people use this server, so it is possible to innovate without guilt.

Where are the benchmarks?

Lwan is in the 10th round of TechEmpower's web framework benchmarks. This independent work tests a large number of frameworks and platforms against a set of tests common to web applications, such as JSON serialization, database queries and templating.

For Round 10, Lwan has taken the crown.TechEmpower Blog

Could you share some details on how exactly Lwan is this fast?

A good place to start are these blog posts. The code is fairly small as well, so lots of things can be inferred from reading it. Also, there's a rather lengthy post that explains the life of a HTTP request from Lwan's viewpoint, which gives lots of insights.

GNU GPLv2+, plus a few other bits and pieces licensed under other permissive stuff. Refer to each file for their respective credits and legalese. It might move to LGPLv2+ (with a static linking exception) in the future, though.

What does Lwan mean?

Nobody knows. Tell us when you find out! Someone suggested a recursive bacronym, "Lwan Will Annihilate Node.js", which is funny because this is very unlikely to ever happen.

Ten years is a long time for a project this small! Important features take a long time to be implemented! There are a lot of open issues in the issue tracker!

Keep in mind that this project has been written exclusively on the spare time of a single developer, who works full-time as a software engineer, and has been prioritizing her mental health by having hobbies that do not involve computers. Also consider that this was exclusively a research/learning project: the goal was not to write a web server (there are many out there that are more capable, after all), but to learn about a lot of stuff that often gets ignored when using higher-level languages and frameworks; focus changed over the years, but, generally, the server does exactly what the author needs it to do. Although it's unlikely that it'll accelerate the development of Lwan, you can always pay the developer a coffee if this project helped you in some way.

Is there a stable release?

No. Some releases were made, only to help some distributions package Lwan, but none of them is a stable release that's suitable for production work.

Is anyone using this server?

Please refer to the GitHub repository for a list of Lwan servers spotted in the wild.

Does it support HTTP/2, or at least TLS?

Experimental support for TLSv1.2 exists (with TLSv1.3 in the works). It requires Linux with tls.ko loaded. There is no support for HTTP/2 as of yet, although work has started.

This web page looks like an advertisement for snake oil.

That's not a question. And, yes, it's on purpose. It's a parody of the web page for a similarly-named web server; in fact, there are a few easter eggs in this web page as a nod to it.
Brought to you by @lafp. Powered by Lwan.